Miss Milborne laid her seconditis to bed this afternoon by romping away with a mares novice hurdle at Fontwell today.  She jumped well, and outstayed her rivals in determined fashion to grind out a much deserved victory.  I was chuffed for Adrian and Sara Brown who put together a little syndicate and bought her in the early spring of this year.  We waited until the soft ground this autumn to run her, and she has been 2nd all three starts this season.  We'll probably aim a another novice against the geldings where her  penalty will be negated by her sex allowance, before planning a route to the mares final at Newbury in March.

Miss Milborne's win was the perfect way to round off a fantastic Christmas Day, where we had both sets of family down and we hosted our first Christmas, where Lettie far preferred eating all the wrapping paper as opposed opening presents!  Lets hope our luck continues at Chepstow tomorrow where we run Knighton Combe in the Welsh National.  Having won the Summer National he had a break, and needed his prep run over hurdles at Ffos Las last month, but that will have put him right for tomorrow, and I am hoping that he can run a decent race, and stay on into a place.  Exciting times..... 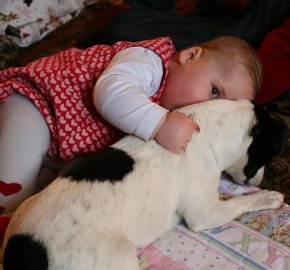 Lettie enjoying her first Christmas with her best friend Olive.