I must start this update with the wonderful news that our head girl, Kate Robinson, has recently been awarded “Stable Staff of the Year” at The McCoy’s.  The awards are named after Sir AP McCoy, the record-breaking 20-time champion Jump jockey. The awards reflect on the triumphs and the highlights of the season and appreciate every character in the sport. The McCoys exist to recognise the individuals without whom this sport would not prosper as it does, and it is with huge pride that Kate won a “McCoy”.  As many of you will know, Kate was our first employee when we started out with just one horse, and now she runs our 50 strong yard, and is irreplaceable.

We hosted our annual owners lunch party earlier in the month, where we paraded 50 horses in front of 150 guests before having lunch in the garden.  Thankfully the weather was glorious and there really appears to be a buzz around the yard, and I hope this continues as the season progresses. 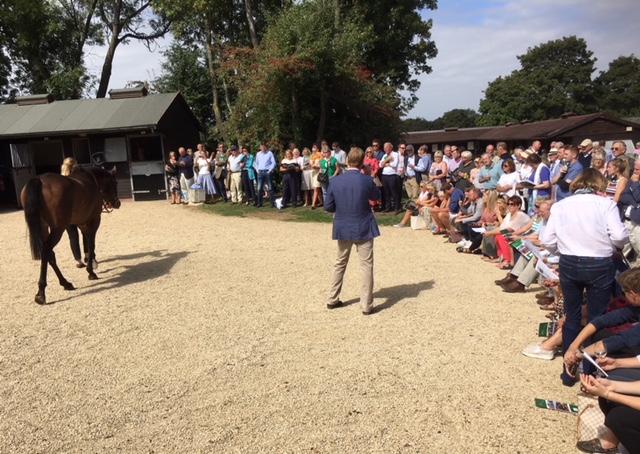 Althoughwe’ve not had many runners this month, they have been running with credit but frustratingly they’ve been filling the runners up spot rather than the winners spot...Following on from Fact of the Matter’s gallent 2nd when he was beaten a neck in a class 2 handicap chase at Cartmel last month, the handicapper gave him a 5lb rise over hurdles as well as fences, which seemed pretty harsh.  So it proved as he was beaten only 2 lengths over hurdles at Warwick last week.  Unfortunately, he’s gone up another 4lbs as a result!

Fact of the Matter is 2nd once again.

I was thrilled that Winter Holiday was 2nd on her racecourse debut in a bumper at Fontwell.  It was our first bumper runner of the season, and I think we look to have a decent group of young horses in the yard this season, which is exciting. Our 2nd bumper runner of the season was Risk and Co who finished 3rd at Market Rasen on Sunday, in what looked to be a very competitive bumper.  He’s another nice recruit for our Racing Club and should improve as the season progresses.

Having won his two novice hurdles Carntop was another to fill the minor honours when 3rd at Uttoxeter on his handicap debut.  He had looked impressive over 2 miles in his novice hurdles, and a number of small things conspired against us on this occasion over a longer trip, but I think he should be seen to better effect next time back over 2 miles.

Filemon looked very unlucky to be only 3rd at Stratford earlier this month, when he looked the most likely winner all the way through the race until he unearthed the 2nd last fence. I thought he’d have an excellent chance back at Warwick only last week, but he sustained a nasty cut on his leg that day, so did well to finish as well as he did in all honesty.   Once his cut has mended, I think we’ll see a horse who can improve through the ranks.

Of our other recent runners, Havisham  was 4th in a class 3 event at Newton Abbot, whilst  Lord Topper couldn’t land the hatrick of wins at Newton Abbott and found the step up in class with more weight on his back just beyond him.  We might give him a spin back on the flat or look for a beginners chase with him now.

Midnight Chill is one horse who I look forward to seeing over a fence this season but first he’ll have a warm up gallop at Chepstow in the Bob Champion Cancer Charity “Legends Race”, where Champion Chase winning jockey Rodney Farrant will be on board.  He’s been an integral part of our team for a couple of seasons now and if any of you would like to sponsor him then please visit:

Midnight Chill schools over a fence.