23rd January - another winner, and the eve of Cheltenham Trails Day

I was over the moon that Alanjou won again yesterday for Jordan Wylie and the Cherrypickers. Jordan and Sean run a syndicate which is made up of current and ex soldiers of the Kings Royal Hussars, which is my old Regiment. Unfortunately none of them could get to Fakenham yesterday, but they cheered him home from several bookies shops around the country. It is a fair trek up to Fakenham, but I have to take my hat off to the track for providing some decent prizemoney, and the boys where chuffed to take home the best part of £7k for their efforts.

We’ve not had many runners this month, as we tend to vaccinate the string and give them a quiet few weeks, but I’m very much looking forward to Cheltenham Trails day tomorrow. We run Present View in the Neptune Investment Management Novice hurdle over 2m4. Having won at the Festival last season, we targeted the Paddy Power Gold Cup in the autumn having had a warm up run in a novice hurdle at the October Cheltenham meeting. He was 2nd in his prep run, and ran a cracker to be 3rd in the Paddy Power, however he sustained a couple of nasty cuts, and so we have given him plenty of time to recover. Our main target now is what used to be called the Racing Post Chase at Kempton on 21st February, so in order to get a prep run into him and saving our chase mark, we thought we’d have a crack at this Grade 2 contest. He’s fit enough to do himself justice, and I hope for a decent run, but his main target is in February so he’ll improve for his run tomorrow. That said he went very close on his prep run in October, so I hope he might be able to reproduce a similar effort!

We had a pretty cold start today, but I was surprised to see that Upper Lambourn featured on the BBC forecast as the coldest place in England this morning! A crispy -9°C was somewhat different to the +30°C Lucy and I had been lucky to have in Antigua last week. We managed to get away for a bit of winter sun having vaccinated the majority of the string. We recharged the batteries and I was chuffed to come back to a winner yesterday. 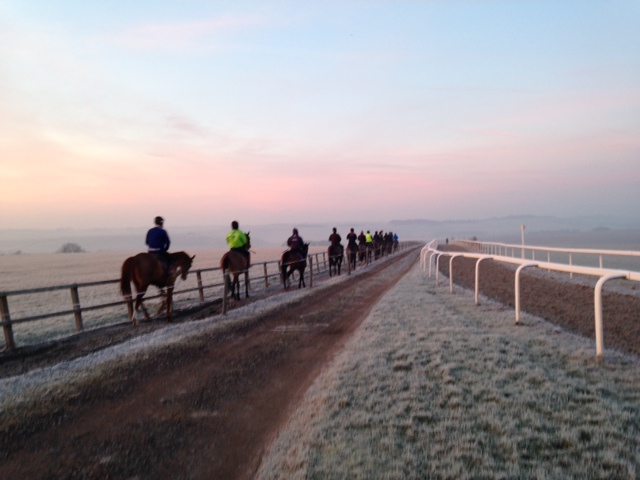 Of our other runners, Jean Fleming made a very encouraging return to the track following an injury and was 3rd at Ludlow last week. She’s a smashing mare who never disappoints and has never been out of the first three in all her 7 career starts. Kassis arrived with us having had a year off the track and she ran well to be 4th at Leicester too. Unfortunately she bounced on her next start at Exeter, but that can be forgiven. Zephyr didn’t quite stay the extended 3m trip at Plumpton and so we’ll drop him back to 2m5 and put the some head gear on him too.

It was a great shame that Huntingdon was called off today as I was really looking forward to running Souriyan again. He won nicely at Exeter on New Year’s Day, and I think he might be the type for the Fred Winter at the Festival…..