Queen of the West made a very pleasing debut under rules yesterday for us by finishing 3rd in a mares novice hurdle at Uttoxeter.  We thought 2 miles on fast ground might just catch her out, as she stays very well - and although she was outpaced turning for home, she was staying on all the way to the line, and was certainty the horse to take out from the race, when we step her up in trip.

We ran our club horse, Millers Reef on Sunday at Stratford, where he was fancied to go close following his success at Hereford last month.  However, there was a downpour before racing, and that made the already watered ground very 'dead' and our chap couldn't bounce off it the way he loves it.  He did well to get into a challenging position at the 2nd last, but the ground just caught him out.  I also think we may be better to run off top weight in a worse race as well, as opposed to a better race with less weight, as he will be able to travel that bit easier, and use his turn of foot at the business end of the race.

Although out of luck with Millers Reef at Stratford, we did manage to come away from the racecourse with an extra horse.  We claimed Plenty Pocket out of the seller for £7k.  He is rated 130 over hurdles, and won some good races on the flat in France.  He is sound, fit, and ready to win.  I wouldn't mind putting him over a fence in a beginners chase as some of these 2 mile beginners chases at this time of year take little winning.  He is for sale if anyone is interested..... 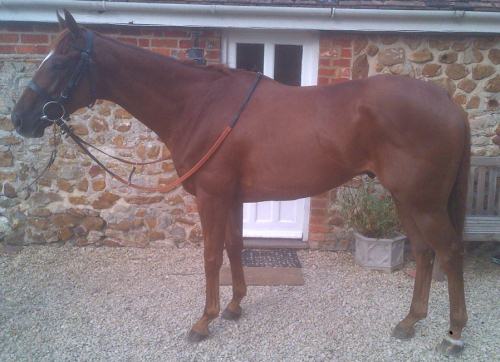 Plenty Pocket is for sale - ready to run and seriously good value.