We've had a relatively quiet week on the runners front. Ballyboker Boy was 3rd at Exeter in a novice hurdle over 2m7, where he probably didn't quite see the trip out having run a bit too free, and Ixora fell 2 from home when still in with every chance at Cheltenham on Thursday in a mares Listed event. Thankfully she's ok - a few scratches etc, but nothing serious, so at least we live to fight another day.... she just came up a bit long and clipped the top and slid away on landing. She was just being a little bit too flamboyant in the soft ground – but it does show that she ‘had plenty left in the locker’. She was a length off Kells Belle (the eventual winner) at the time, and seeing as we beat her off level weights at the festival, and we were receiving a pound off her on Thursday, then I think we would have been there or there abouts.....but thats racing!

I went to the sales on Wednesday evening, where we witnessed a lot of very smart Irish Pointers coming under the hammer. One of the top lots was a horse called Present Lodger who went for £200k, having won an Irish Point at Lismore. The horse who finished 2nd to Present Lodger was a horse called Ultra Klass who I bought in Ireland the day after his race. He is a 4 year old, good looking son of Ungaro, and cost considerably less than £200k.....!! He is for sale, so if you are interested in having a look at him, then please do give me a call. 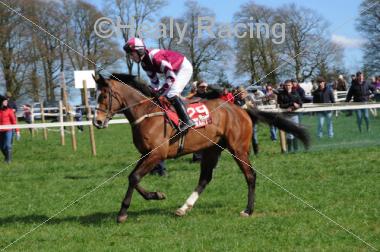