Well - Ballyboker Boy ran an absolute cracker yesterday to be 2nd at Ffos Las on his debut under rules.  The front 2 pulled 29 lengths clear of the 3rd placed horse, and Nicky Henderson really rates the winner highly as he describes Top of The Range, as “potentially well named” as he won a bumper from One Term who came out and won a listed bumper at Cheltenham at the Paddy Power meeting, beating Mountbazon among others..... Great form!  Bally looks to be an exciting new recruited to our team this winter. 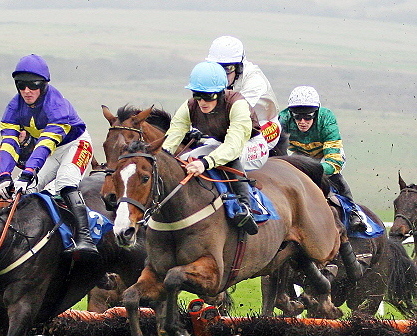 Knighton Combe had a good blow out over hurdles yesterday to finish 4th in a novice hurdle, and that should give us plenty to work on in the build up to the Welsh National after Christmas.  Shinko Moon ran well at Kempton - he settled better, but we still need to brush up his jumping slightly, and so we'll go back into the school and get him over some more poles, to encourage him to pick up through his withers.