Having had rattled the cross bar at Cheltenham over the weekend, it was good to hit the back of the net again today when Kiltealy Briggs won an EBF Qualifying novice hurdle at Hexham this afternoon by 36 lengths under a good ride from the McNeill families retained jockey, Adrian Heskin.  Having been 2nd in a bumper and again on hurdling debut earlier this season, it was lovely to see him progress and improve to win in style.  We’ll look to step him up in class now and we may consider a Grade 2 at Cheltenham in December.

Our horses all ran really well at the BetVictor November Cheltenham meeting this last weekend, where the ground was very heavy.  Having won his previous 5 hurdle starts, Pacify was looking to maintain his perfect record in the Grade 2 supreme trial.  However, he finished a very good 2nd where he was beaten only 2 lengths under a 5lbs penalty. The ground blunted his speed and the eventual winner rather got first run on us and we were playing catch up and just never quite got there.  However, he lost nothing in defeat and we may look to run him in the Grade 1 Tolworth at Sandown in January where he wouldn’t carry a penalty.

Legends Ryde won her bumper at Carlisle last month and we opted to try for some ‘Black Type’ by running her in the Mares Listed Bumper at Cheltenham on Saturday.  She fulfilled our aims when 2nd and in turn earning picking up the all-important black type, but she was a bit too keen in the fist half mile and that told up the final climb to the line.  She will go novice hurdling now, and the Grade 2 Mares Final at Newbury in March will be her target.

The prolific 4 time winner, Some Day Soon was an honourable 4th in the 2m5 Grade 2 novice hurdle on Saturday, but he really didn’t enjoy the ground.  He’ll have a well-deserved holiday now and we’ll look to bring him back for a handicap at Aintree before he goes Novice chasing through the summer.

Whilst our final Cheltenham runner over the weekend was Fact of the Matter who won over the Cross-Country fences at the December meeting last season.  Once again, he isn’t in love with heavy ground, but he ran his heart out to be 6th, and not beaten far either.  Let’s hope the track dries out a bit for the December meeting.

We have been pretty active on the recruiting front lately, and I bought a 4 year old half-sister to the Grade 1 winner, The Liquidator at Cheltenham on Friday.  Feralkat won her maiden Irish point-to-point at Moig South in County Limerick on 3rd November this year on soft ground and the Irish pointing website noted: “she seems to possess a nice blend of both speed and stamina and as such she should turn into a capable performer.”  She was trained by Denis Hogan, and the last horse we bought off him was Thomas Macdonagh, who bolted up in his novice hurdle for us last week…..and he highly recommended this mare to me.  She has the size, scope and pedigree to reach the very top level and is a hugely exciting horse to go to war with.  We are partnering her out in 20% shares, so do let me know if you would be interested. 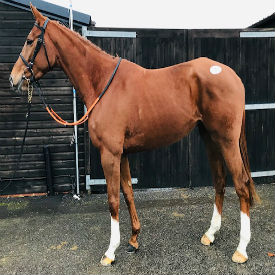 We bought a 3-year-old half-brother to our very own Grade 1 performer, Val de Law, at the Arqana sales on Monday.  Ga Law was a very impressive winner of his sole novice hurdle start at Argentan and looks every inch as good as his brother.  We’ll give him a mini break now and look to have him back ready for the Triumph or the Boodles at the Cheltenham Festival.

Another recent acquisition is a 5-year-old Presenting gelding called, Carrig Copper who isout of a sister to the recent Badger Beer winner, Give me a Copper.  Carriq Copper was only beaten a neck in a competitive Dromahane maiden where he was given a rating of 90.  He is a cracking big, embryotic chaser and is an exciting new horse to add to our strong team.