Its been a pretty busy weekend really.....  We mixed fortunes on Friday at Cheltenham where Graduation Night ran well to be 4th in an ultra competitive handicap chase.  He got shuffled back in the pack and slightly out of his ground with a circuit of Prestbury Park to go, but made up ground well, and stayed on strongly up the hill.  If he had an extra furlong he would have been bang there!  I think these regional nationals will be his target this season, and provided he continues to improve with a step up in trip, then he could develop into a real National horse in a year or two. Click here to see his race on Racing UK.   http://www.racinguk.com/video/race-replays/20121019/2081829

Ixora finished 5th at Cheltenham on Friday in a decent novice chase, and although she finished in the money again, I think she ran a little bit below par, and I'd say it is the end of a long summer for her.  She has won 2 novice chases, been 2nd twice, and run a cracking race at the Festival in March.  She can enjoy a well earned holiday over the winter now, and come back again for the festival in March.

Jawhary also ran on Friday but at Fakenham in a weak looking handicap chase - he looked to have every chance again until virtually unseating Matt at the third last, where Matt lost an iron and pulled him up.  What a pain!

Present View ran yesterday at Kempton, where he finished 4th.  He was far too keen and headstrong, but he showed that he really is some animal - he jumped and galloped so exuberantly that he was never going to get home over 2m5 in soft ground.  We now need to channel that exuberance to fully show his talent - it will happen, but being only 4 years old, he must learn to settle better. 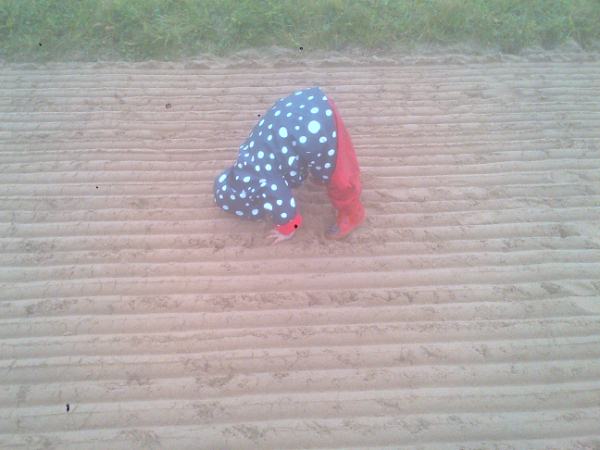 Lettie testing the going on the gallops