We had an incredible bank holiday weekend with a treble on Sunday, which followed a winner on Saturday evening, and another winner last week.

Some Day Soon followed up his maiden hurdle win earlier this month by demolishing a Class 3 Novice Hurdle at Kelso on Sunday.  Under a good front running ride from Gavin Sheehan, he jumped and galloped and looks like he is improving all the time.  We’ll look to run him in another Class 3 novice hurdle before seeing how far he can progress.

Some Day Soon wins the Class 3 Novice at Kelso and initiates the treble.

Meanwhile at Fontwell we had a double courtesy of Adrrastos winning the Class 3 handicap chase under a tactically astute Aidan Coleman, and Our Reward won a handicap hurdle under our new 10lbs conditional jockey, Ben Hicks.  Adrrastos had run well to be 4th in the Red Rum Chase at the Aintree Festival, before not getting the run of the race in a Class 2 at Kempton, and appreciated droping back into a Class 3 here, but should be capable of going back up in grade now.  Our Reward was having his first run in “Heart Racing’s” colours, and showed real tenacity to get up to win by a head. Amazingly enough there are three 5% shares available in this five-time winner, so do get in touch if you’d like to join this winning team.

Adrrastos and Our Reward both win at Fontwell.

The treble on Sunday followed Chapmanshype’s win at Ffos Las on Saturday evening where he won on handicap debut.  Gavin was very patient on him, and came with a lovely run up the straight to win by a narrow margin.  I am quite sure there is a lot more to come from this unexposed and progressive youngster. 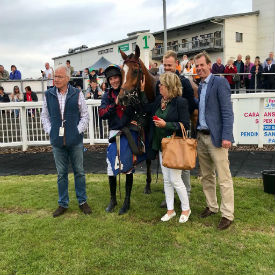 Chapmanshype is the first leg winner of our four timer.

Our winner last week came at Ludlow courtesy of Oneofthesenights, who was making her debut on the track having had the best part of three years off with an injury after winning her only Irish point-to-point.  It was a wonderful team effort to get her back on track and to win after such a layoff – Lucy rides her each day and must take a lot of credit here as must Jamie Magee as she has spent a lot of time on the water treadmill too.

Oneofthesenights wins after nearly 3 years off the track.

We’ve not had many more runners recently, but most of them have been in the winners enclosure.  Floral Bouquet was just touched off when 2nd in a competitive mares handicap hurdle at Aintree.  Unfortunately, there was a bit of scrimmaging on the final bend and she lost valuable momentum, when she did get rolling the winner had first run on us, but we stayed on really well to snatch 2nd place in the shadows of the post. She will have a holiday now and be back for an autumn campaign.

I was pleased to see Three Ways run well to be 2nd at Huntingdon last week.  He missed most of the winter having damaged a splint bone, so he will improve for the run and looks sure to get back to winning ways this summer.  He was given a lovely ride from Ben Hicks but unfortunately for Ben he dropped the shammy leather after unsaddling on his way back to the weighing room.  He therefore weighed in 1.5lbs light and was disqualified.  It was an unfortunate error, but Ben remains a talented rider and will be very valuable with his 10lbs allowance.

Having won the previous week, we ran Between the Waters under a penalty at Ludlow where he was 3rd.  He looked a bit flat, so we’ll freshen him up and look to run later in June.  Lostnfound filled the same spot at Cartmel as did Carntop on his chasing debut, who should improve through the summer.

We are now well into the sale season, and last week we were up at Doncaster where we bought a very exciting prospect called Mustang Alpha, who made an impressive winning debut when taking the maiden point-to-point at Bartlemy.  He is by Stowaway (sire of Grade 1 winners Outlander and Champagne Fever among others) and is out of a sister to the multiple Grade 1 winner Noland, who won The Supreme Novices at the Cheltenham Festival, the Tolworth, the John Durkan and the Aon Chase!  Mustang Alpha has the pedigree, profile and physique to be a Graded performer and a very exciting recruit to our team.