What a difference a year makes - last year during the cold weather we were at a complete standstill, not only was there no racing, but also we were unable to keep the horses in full work due to the frozen gallops etc. This year our routine hasn't been held up at all and that is due to the fantastic facilities that we have here in Lambourn. The gallops really are amazing. We were even schooling yesterday morning.....

We have been busy recruiting some new horses over the weekend. We have bought an exciting 5 year old mare called More Talk (she is Idle Talk's full sister) and she looks a lovely type. I'd hope she could follow a similar path to Miss Milborne, and be competitive in bumpers this spring, before going novice hurdling next season. She has been pointing in Ireland, and has some very good form.

Another nice purchase has been a strapping 5 year old by Kris Kin called Scuderia. His dam was a half sister to a Listed winner, and Scuderia finished 2nd (beaten a short head) in an Irish Point last weekend, on his first and only run to date earning an excellent RPR of 87. The Irish timeform noted,"Scuderia, a newcomer that wasn't overly ready, stayed on well in the final analysis & he has definite track aspirations." He is for sale - so please do let me know if you'd like to come and see him? 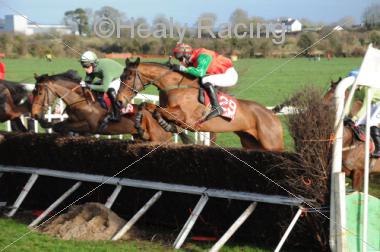 Scuderia puts in a fine leap in his Point.