Lucy, Lettie and I spent last week fishing in Scotland on the river Awe. We try to head up there every year, and we had an excellent holiday, but unfortunately we failed to catch any salmon. However we did have a few good games of golf, and plenty of good lunches.....

This week we have finally had some decent weather, and so we can finally run some of our 'summer' jumpers. Ixora ran a blinder at Bangor on Tuesday evening but just failed to give away a double penalty, when she finished 2nd. It was a fantastic performance, and she must be the best novice chaser we have seen this season. She can now head for a listed handicap chase at Newton Abbot on 1st September.

I really thought Jawhary was going to run a big race this evening at Uttoxeter - but Daryl was caught napping at the start and missed the break and then gave him a shocking ride. It was unfortunate as we have waited a month for this ground! At least the handicapper should drop us a few pounds, and we should have every chance next time - when hopefully young Brendan Powell can ride him again (off with concussion today).

I popped out to Ireland yesterday with Tom Malone (bloodstock agent) to have a look at a few horses dotted around the country. We specifically went to see a mare called Magic Vixen - a 5 year old bay mare by Old Vic who is a three-parts sister to Kicking King. She won her bumper at Limerick on her second start, and she looks a useful sort to go novice hurdling with this season. Our winter team looks to be shaping up nicely....... 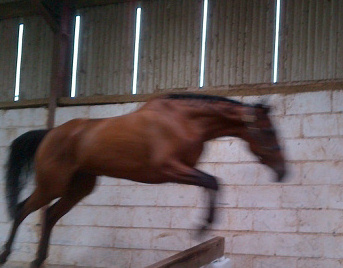 A rather poor picture of Magic Vixen loose schooling.