Apologies for not updating the website over the last few weeks - time has swept past so quickly but I am pleased to say the winners have continued to come and our first Grade 1 runner was 3rd.

We started April in the winners enclosure with Tea Caddy at Wincanton, and then we sent the unexposed Future Gilded up to Haydock for the £50k Channel 4 feature on the first Saturday of the month. He tanked his way through the race and looked the winner at the 2nd last, but didn’t quite stay and ended up finishing a gallant 3rd, but unfortunately came back with a strained tendon and will be off games for a while. 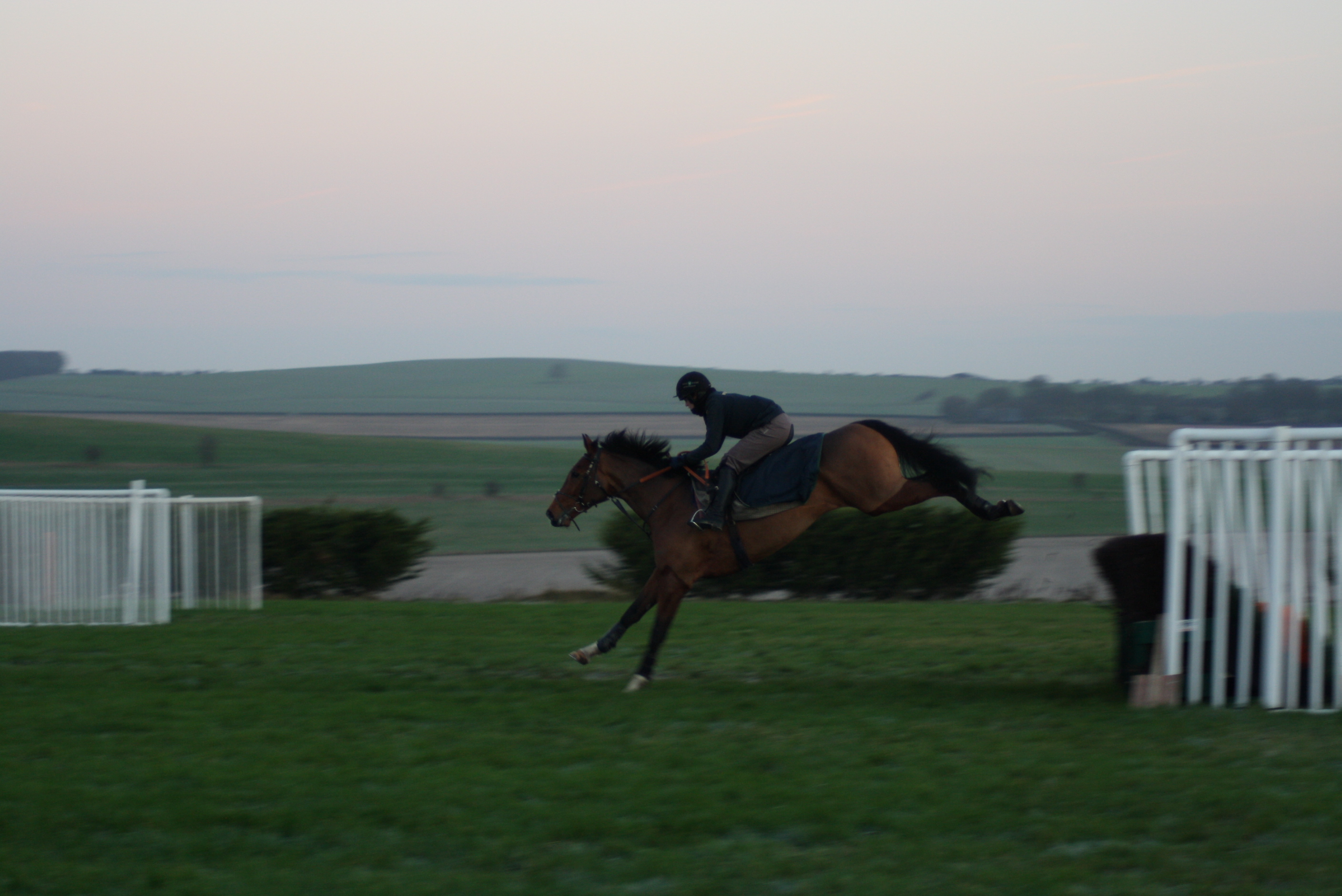 Future Gilded on the schooling ground.

Meanwhile back to the bread and butter and some of our summer horses have had their first runs of the ‘summer season’. To The Sky ran well to be 3rd at Plumpton where a mistake 3 out probably cost him the race. At the same meeting Ethelred was beaten a neck on his handicap and chase debut.

Having hit the crossbar a few times in the first week of the month, it was extremely frustrating to see Borguy hit the deck with the race at his mercy at Huntingdon on bank holiday Monday. Thankfully he came back relatively unscathed and he should be able to gain compensation after 6 weeks of R&R in the field. Heronry also hit the frame when 2nd in the novice chase there, but picked up a frustrating injury.

As time was ticking away, so Aintree had descended upon us, and feeling brave we stuck both Val de Law and Monbeg Theatre into Grade 1’s. Having fallen at the last when looking likely to win, and then finishing 2nd at Leicester in his second novice chase start, we decided we didn’t want to lose Val de Law’s novice status this late in the season unless it was in a big race, so we let him take his chance in the big novice chase. He didn’t disappoint and finished 3rd behind Clarcam and Vibrato Valtat. It looked as though he didn’t quite stay 2m4, so we’ll drop him back to 2miles, and either run him at the start of May (the new season) or we’ll give him the summer, and then dream about next season with him…. Monbeg Theatre ran well too, but the step up to 3 miles was beyond him and having travelled well to the 2nd last he didn’t get home. He’ll have a good summer holiday now, and he’ll be chasing next season.

Whilst the eyes of the racing world where on Aintree we nipped off to Taunton with Dino Mite who defied her penalty to win her 2nd novice hurdle of the season against the boys under Michael Nolan. She is a little pocket rocket but has the heart of a lion, and showed great courage to win. There were plenty of celebrations in the O/T bar at Aintree! Our Three Sons made his racecourse debut in the bumper at Fontwell the next day, and was narrowly denied by a neck….argh! He ran an absolute belter though, and is a horse to follow.

Having run well in the Fred Winter at the Festival, I was desperately trying to find an opening for Souriyan to win his 2nd novice hurdle under a penalty, but as a mini heat wave hit England, I didn’t want to risk him on fast ground, so we sent him to Cheltenham for a class 2 novice hurdle. Stepped up to 2m4 he ran his best race of the season and was only denied by a length to be 2nd to a nice sort of Nicky Henderson’s. Souriyan is now on his summer holidays but will be another to go novice chasing next season.

Souriyan in the paddock prior to finishing 2nd at Cheltenham

You’ve guessed it, we had yet another 2nd at Wincanton last weekend, where Detroit Blues stepped up on his bumper form and in the process looked a useful sort for a spring and autumn campaign over hurdles. In actual fact finishing 2nd might not have been too disastrous as at least it means he has a whole season as a novice now.

Having been reluctant to start at Southwell last week and still finished 3rd, we made the bold move to run To The Sky three days later at Newton Abbot. Thankfully it paid off as Brendan gave him a peach of a ride to get his head up on the line. He has run 8 times this season, and never been out of the money – what a legend.

To The Sky wins at Newton Abbot.

So as we headed into the last week of the season, we continued the momentum and Dino Mite came up trumps again and in turn won her 3rd novice hurdle, again at Taunton. Not many horses can defy a double penalty but she did in tremendous fashion, and she gave us our 19th winner of the season.   Little more than an hour later we had the favourite at Ffos Las, where we were hoping Kassis would follow up her Chepstow success and bring up our 20th winner. However, it wasn’t to be and she finished 3rd having found the ground a bit quick for her. She’ll have her summer holidays now, and is another who’ll go novice chasing next season. 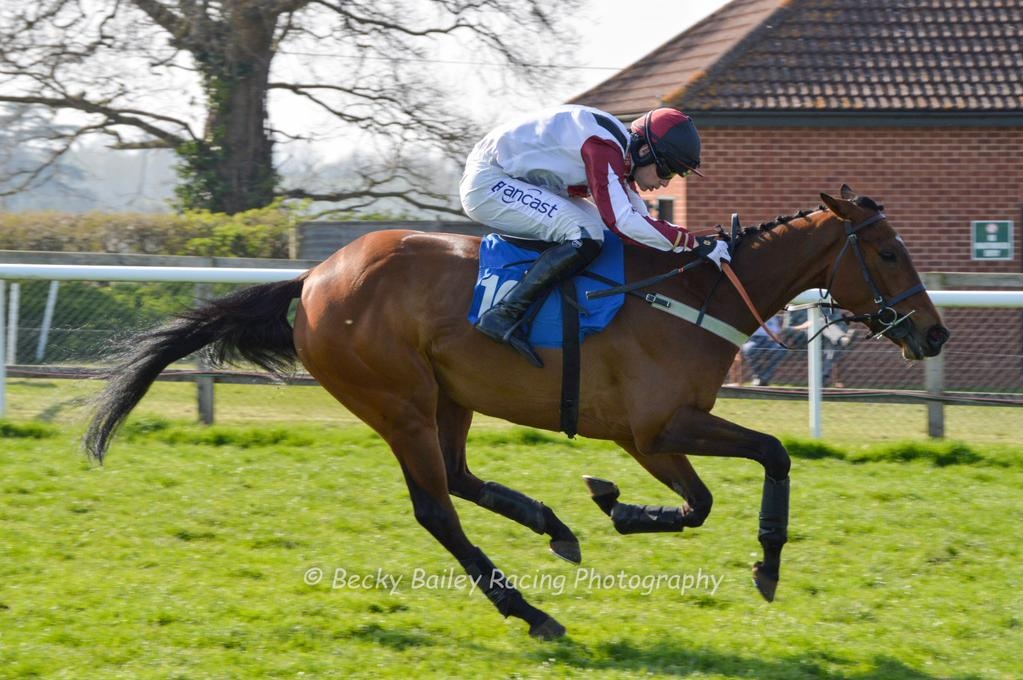 As I summarise the season, I can safely say that we have had a pretty decent season really as we have been going through a massive transformation. Since Present View gave us our first Cheltenham Festival winner, we have been restocking our yard to fill it with young potential, and so patience has been the key this year, and thankfully everyone’s patience is starting to be rewarded.  Highlights this season have to include Present View's 3rd in the Paddy Power Gold Cup, Val de Law's 3rd in the Grade 1 Novice Chase at Aintree, Dino Mite's three novice hurdle wins, and Souriyan's game effort in the Fred Winter.  This season our figures show that we have had a 12% strike rate with 19 winners, and a massive 60% of our runners have been placed! We’ve topped our previous best prizemoney total, but unfortunately we’ve had rather too many 2nds. However, we’ve formed a great foundation block from which to build now, and I am looking forward to next season with much enthusiasm.

So as one season ends, the summer of sales being, and on Friday I bought a gorgeous 5 year old gelding called Our Reward.  He is by Morozov (the sire of Eduard - 4th in the Ryanair this year) and he is the full brother to the highly regarded, Sir Abbot who won his bumper and novice hurdle and is now 126 rated, and a better chaser in the making! Our Reward won his point in fine style at Durrow in March.  A six runner field was soon reduced to the three that really counted and he quickened up and won nicely in the end from Minella Daddy who came into the race with strong form, and as such it gives his performance plenty of credit.  He is for sale!